I bet you thought I fell off the face of the Earth. Hmmm, close but not quite! Just a busy few weeks around here but I’m making a resolution to update at least once a week if not more often. Now I’m not promising it’s going to be anything long or involved, but at least there will be updates on a fairly regular basis.

What’s happened in the past month, you’re asking?

Well, I learned that Freemont (a neighborhood in Seattle) is the center of the universe. They’ve got proof, too. Check out this sign in the middle of a main intersection there. And it points to two great places in the US: the Guggenheim and Wall Drug. Freemont is one of those funky neighborhoods where the vibe is young, exciting and eclectic. Starbucks and a thrift store are doors away from each other. College students walk next to 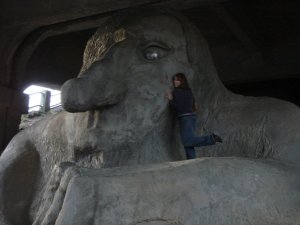 professionals. Colors of hair are as varied as the rainbow. When I visited with my friend Marianne, we wandered upon a real soapbox derby race — we actually missed it by about 30 minutes. Oh, and did I mention that there’s a “rocket” that sits on top of a building, a troll lives under a bridge and there’s a statue of Lenin? Wild! (Check out more crazy Freemont pictures by clicking here.)

In early October I had a friend from Connecticut make the trip West to visit. Eric and I had a great time bumming around Seattle and just catching up. It’s an amazing reminder of how good life can feel when you’re spending time with a friend! You kind of forget that when you’re meeting new people every day and not necessarily making real friends quickly. I loved not having to explain something about the way I think or react because it’s different than the thought pattern here. Or not having to tell someone, “I’m a writer” or “I’m a dancer” or “I hate peanut butter.” Crazy little things that make a difference in your life when it’s nearly everyone you’ve got to tell it to rather than just one new friend. It certainly makes you look at life differently. All the same, spending time with Eric for a few days was a welcome change of pace. Thanks for coming, Eric!

Right, so we wandered Pike Place Market and all its nooks and cranies. Enjoyed a latte (me) and tea (Eric) at the orginal Starbucks. Admired the view from the pier next to the Aquarium, which we would tour the next afternoon. Can you believe there were no sea horses? I was so dissapointed! They did have sea otters and sea lions though, so maybe I should give them a break. And dinner at a little place in the market with views of the Sunset over the water. It was nice.

The next day we did something typically Issaquah, attended the Salmon Days Festival. Now, I’m quite proud of the fact that this was Eric’s 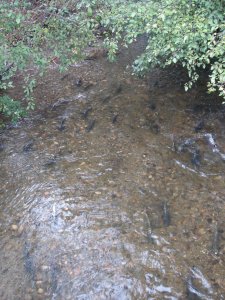 first real outdoor festival and I got to show him around. There weren’t any rides that we saw, but lots of craft and food booths. If you go next year and you’re hungry, try the German booth with the curly fries…you get your money’s worth! And did I mention that there’s lots of salmon at the festival? It’s a little disturbing that they’re coming there to die, but I guess it’s the circle of life. (Makes me want to sing that Elton John song from “The Lion King.” Brace yourself.)

Next we ventured back into Seattle for lunch at the Elliot Bay Book Company’s cafe. It’s a super quaint little place in the underground floor of the store. We later found out on The Underground Tour that it was part of the underground city that replaced original Seattle in the late 1800s. It’s a really cool story but far too long to write here. Instead, enjoy the view from one of the balconies in the store.

And what tour of Seattle would be complete without a drive around the Space Needle. Eric’s shot with my camera. Nice job considering I was moving on everyshot he took! (You can see more pictures from that weekend here.)

In other news, I’ve been trying to get out and hike a bit in the area. (Still haven’t made it to Mt. Si if you’re wondering.) Marianne and I went a few weeks ago on a trail really close to my house. Check out Tradition Lake behind us here.

There is plenty more going on out here — I was called “the color in Pleasantville” one weekend for wearing my pink jacket on a dreary day, I finally bought a bookcase that happens to perpectually lean to the right, I’ve kind of adopted a cat that is afraid of me…I call him kitty, I have a new fish…I call him fishy, I’m taking ballet classes at Pacific Northwest Ballet and loving it, and I have two plants that I’ve managed not to kill. Yet.

I miss all of my friends and family back in Connecticut so leave me comments, drop me an email or give me a call. I want to hear how life is for you. As for me, life is good.

The beautiful foliage I’ve been watching for the past few weeks.